C0VID PCR Test Swabs Are As Dangerous as Inhaling Asbestos

C0VID PCR Test Swabs Are As Dangerous as Inhaling Asbestos

An experimental physicist and bio-materials researcher examined various PCR test swabs under a microscope and found that the fibres they contain are as dangerous for human beings as inhaling asbestos.

Professor Antonietta Gatti examined various PCR test swabs and analysed their ingredients. The results showed that they are made of tough materials and contain a large number of nano-particles including silver, aluminum, titanium, and glass fibres. All of which are not declared on the PCR test package insert.

According to the Professor if these fibres get stuck in the mucous membranes they can cause severe wounds and inflammation. Mucous membranes that are no longer intact can no longer fulfill their role of fending off viruses, bacteria and fungi before they reach the airways. The germs penetrate the respiratory tract without any immune filter. This isn’t good news for those who have been compliant with the authorities rules since the start of the alleged pandemic and take part in regular testing and mask wearing. This is because face coverings are the ideal breeding ground for all types of germs.

In the laboratory, Professor Gatti used electron microscopy (ESEM and EDS) to analyse various types of swabs, which are used to collect human organic material for PCR diagnostics, in order to check the morphology and chemical composition.

With a “cotton wool” stick made by Biocomma in Shenzhen, China, it was not possible for Prof. Gatti to determine whether it was made of carbon or cotton. The dirt in the product consisted of calcium corbonate, stainless steel and silicates.

A brush-like test stick from Manta, China, showed a large number of broken fibers. Carbon, oxygen, silicon, zirconium, sulfur, aluminum, titanium and sodium were found to be components of the sample.

Another swab from Biocomma appeared to be made of fiberglass, or at least to have a fiberglass coating. Components were carbon, oxygen, aluminum, silicon and titanium. It could not be ruled out that an additional coating was made of organic materials.

The tip of the applicator of another test stick – FLOQSwabs – was coated with short nylon fibers arranged vertically.

Prof. Gatti said – “The company explains that the fiber core is made of nylon with a coating of a patented material, which in the analysis, turns out to be silicate-zirconium-titanium. This coating makes the fiber harder so that it is able to tear the mucous membrane. There is a chance that the pressure applied during the smear manoeuvers could break some fibres that remain in situ. When this happens, they can cause a foreign body reaction that can damage the mucous membrane in such a way that breathing and speech are impeded.”

According to the analysis by Professor Gatti, the small white dots on the picture of the swab neck are silver nanoparticles – “Silver is a material that is not declared in the manufacturer’s data sheet.”

“The “porcupine” swabs are made from tough fibers. If they scrape on the nasal mucosa, they can damage it, causing a bleeding lesion or, in any case, trauma to the tissue.

“During the healing process of the mucous membrane, the broken fibers can penetrate the tissue without an opportunity to remove them, causing the formation of a granuloma or fibrotic tissue, as happens with any foreign body.

The medical devices examined are not completely biocompatible and therefore do not meet the requirements of ISO standard 10993 and the tests required to obtain the CE mark.

The summary of the professors findings were as follows – 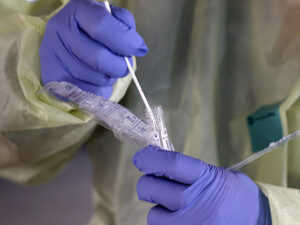 PrevPreviousA Beautiful Poem Written From Lilly Expressing Her Deepest Feeling Around the Impacts of the Pandemic
NextC0V-19 Vaxxination of Children and Adolescents. Futility Danger and Intergenerational TheftNext